In August 2012 Jesse Falls and I attempted an unsupported second ascent of the alpine rock climb called Horn Please, located in the Indian Himalaya. This stunning climb shoots up Neverseen Tower, a granite tower found in a valley branching off the Miyar

Nala (Valley) in Northern Himachel Pradesh. Horn Please was first climbed in September 1992 by Massimo Marcheggiani, Leone Di Vincenzo, Alberto Miele (Italy) and was given the grade of VII. More information on that trip can be found here – Climbing in Miyar Nala, Himachal Pradesh.

It was reported that the second ascent was successfully completed in June 2017 by an NZ team. The New Zealand Alpine Club (NZAC) funded trip consisted of Allison Swintz, Nick Cradock, David Shotwell and Llewellyn Murdoch. The information below was provided to Nick Cradock prior to that trip and outlines our approach to the climb. Their comprehensive write up can be found here – NZAC Miyar Valley Expedition 2017 Report.

Jesse and I were in the Miyar Nala (Valley) for a month in August 2012 and camped at BC Miyar (3950m) for the first week or so. It’s a beautiful campsite with big green pastures and a fresh water source.

We spent a day hauling all our gear up to what we called ‘Green Camp’ (GC) (4400). GC is around two hours walk (with gear, around an hour without) up the Tawa Glacier and sits under Castle Peak (spotted some awesome new routes here!). The walk up is ok, with steep grassy slopes for around 1/2 then large rocky ground for the rest. Stay south of the glacial river. It was quite strenuous with heavy packs. We did this four times. It’s another beautiful spot to base yourself for the next push to ABC. We encountered bad weather and spent 11 days here :(.

Walking to base camp 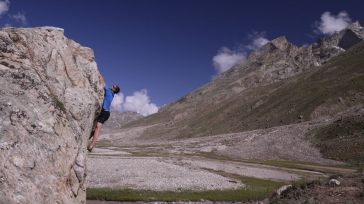 We hiked up the Tawa to the base of Neverseen twice, carrying loads and left a cache of gear at GC. This walk was on unstable moraine and wasn’t overly pleasant. If we went back we would hire someone to help us carry loads to minimise the ups and downs. We found it easier sticking to the northern side and had a few close calls from moving boulders underfoot/body. The walk does improve when you hit the icy section of the glacier.

We spotted a big cairn around 400 meters from the base of Neverseen. ABC was at around 4900m. The cairn was easy to see. We spent two hours making a platform for our tent… fun times. There is another camping option south of here around 30 mins walk back. The polish guys camped here (Michal Apollo et al). This walk took seven hours with packs and three and a half back without.

Getting to the rock on Neverseen took us around 2 hours from the campsite. A bit of moraine, a bit of low angle ice (we used crampons) and a section of softer low angle snow which became steeper (60 deg). 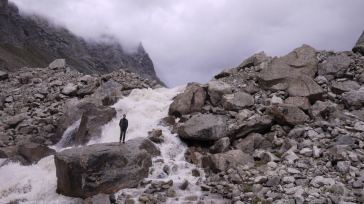 To get to Horn Please we roped for 50m on the steeper snow. This pitch crossed a thin bergschrund. The next pitch was up a 45 degree loose and dirty gully for another 50 meters. Gear was suspect and difficult. The start of the climb proper began at the end of this pitch. We made it up the first rock pitch and retreated as we were led astray earlier in the day by a fixed line… which we thought was the climb but it was a ??? new route. The first pitch was awesome. Solid granite and good moves. There were some bolts for the belay! We ended up making it to around 5300m. There is an obvious new route up the main corner of Neverseen. It was quite wet when we were there.