My transition from a ‘three liner’ to a ‘two liner’ D (6.95 aspect ratio) paraglider, with focus on comp flying.

I hope this article is useful to paragliding pilots thinking of flying a two liner paraglider for the first time, while also providing some helpful tips for experienced two liner competition pilots. I couldn’t find much information on the web so I asked a few seasoned two liner pilots for advice. This advice made my transition smoother. Thanks everyone. 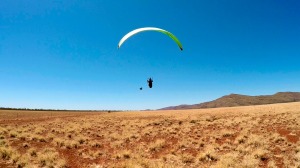 Background information on my transition

In January 2019 I decided to take the next step in performance and move to a two liner paraglider. The plan was to fly it in two Australian comps and use it as my ‘Australian wing’. Was I ready? I felt I was. I had a few interesting looks when asked which wing I was flying previously (lightweight high B). I felt like I was prepared mentally as I had spent many hours flying committing lines in Bir, India. In Bir I wanted the passive safety of a three liner because throwing my reserve was going to end up in a world of pain. I needed all my faculties and I didn’t like the idea of being overloaded mentally. Before the Mentor I flew a Skywalk Cayenne 5 for 200 hours. I had been actively piloting with the C lines for around 300 hours with the idea it would help me to transition to a two liner where I would spend a lot of time steering with the B lines.

I chose the Flow XCRacer as my first two liner. This was based on personal research which included chatting with many pilots about its behaviour. I had also spent a year monitoring its performance and knew it would be a competitive competition wing.

My first flight was quite scary as it was on a very hot, very lumpy and bumpy Manilla day. Having a nice coastal flight in laminar conditions would probably have been a smarter option but hey, I am still here. In hindsight it ended up being a very good intro – what doesn’t kill you will make you stronger, right? The following day was mellower and I felt more connected to the wing after a nice 4 hour flight. I am amazed by its performance and feel it has increased my flying canvass by around a third. It will be fun to see how I go when I snag an epic day on it.

Plan is still fly a high B or mid C in the BIG mountains as I see no reason to compromise safety, where performance doesn’t really matter in that environment.

Warning and disclaimer – Paragliding is a hazardous sport with the potential for fatal accidents. Care has been taken to provide as accurate information as possible. The editors take no responsibility for any inaccurate information or problems that may occur from the use of this information.